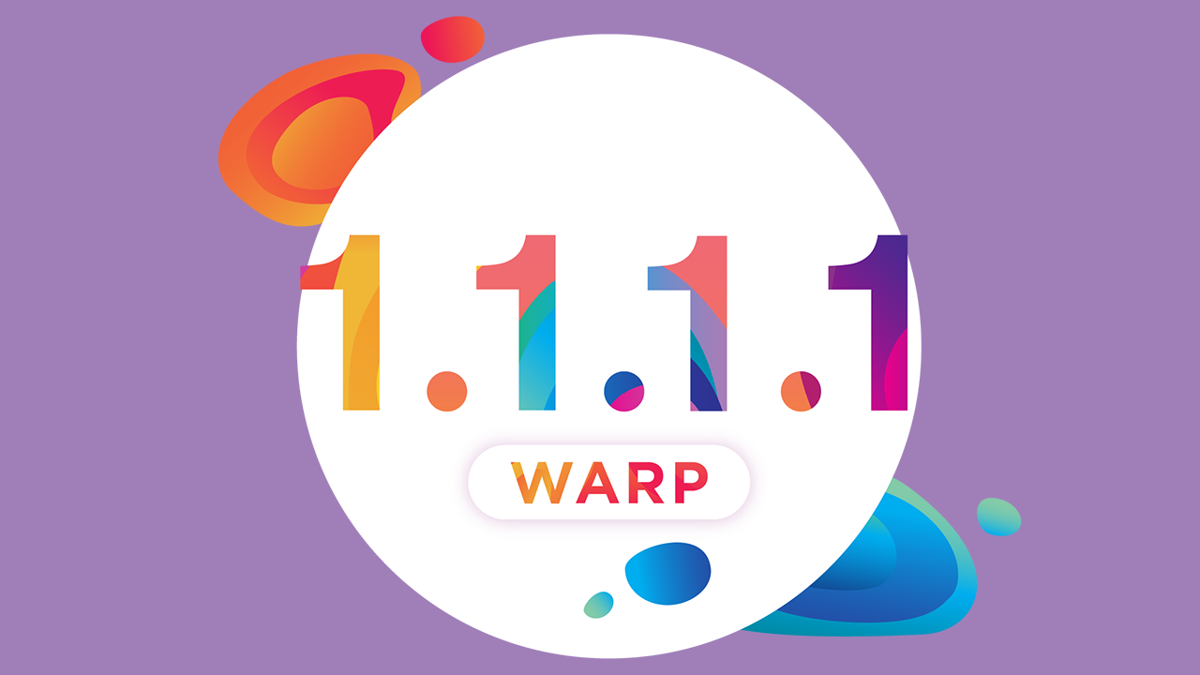 Cloudflare is best known for its network infrastructure and security technology, but its 1.1.1.1 DNS resolver is aimed squarely at consumers. This service hides your DNS requests, protecting important information from your ISP. The optional Warp feature seeks to improve your browsing speeds, while offering some—but not all—of the protections of a VPN. While 1.1.1.1 and Warp will improve your online privacy, we were surprised by the incompatibility issues we encountered with this product.

It’s important to say at the outset that 1.1.1.1 is not a VPN. A VPN encrypts all your device’s data and sends that information to a server controlled by the VPN company. This process hides your true IP address and prevents your ISP—or any spy on your network—from monitoring your traffic. For more on VPNs, you can read our piece on what a VPN is and why you need one.

Instead of concerning itself with all your traffic, 1.1.1.1 only focuses on domain name system (DNS) requests. DNS is like a phone book translating human-readable URLs into machine-readable IP addresses. Normally, your ISP handles DNS resolution and can therefore monitor your online activities as a result. But not if you’re using 1.1.1.1, which takes over DNS resolution and thereby cuts snoopy ISPs out of the loop.

Part of the argument for 1.1.1.1 and similar products is that VPNs are overkill for most people, and their protection comes at a high cost to performance. While a secure DNS resolver only secures DNS requests, the wide adoption of HTTPS means that much of your online activity is already encrypted. 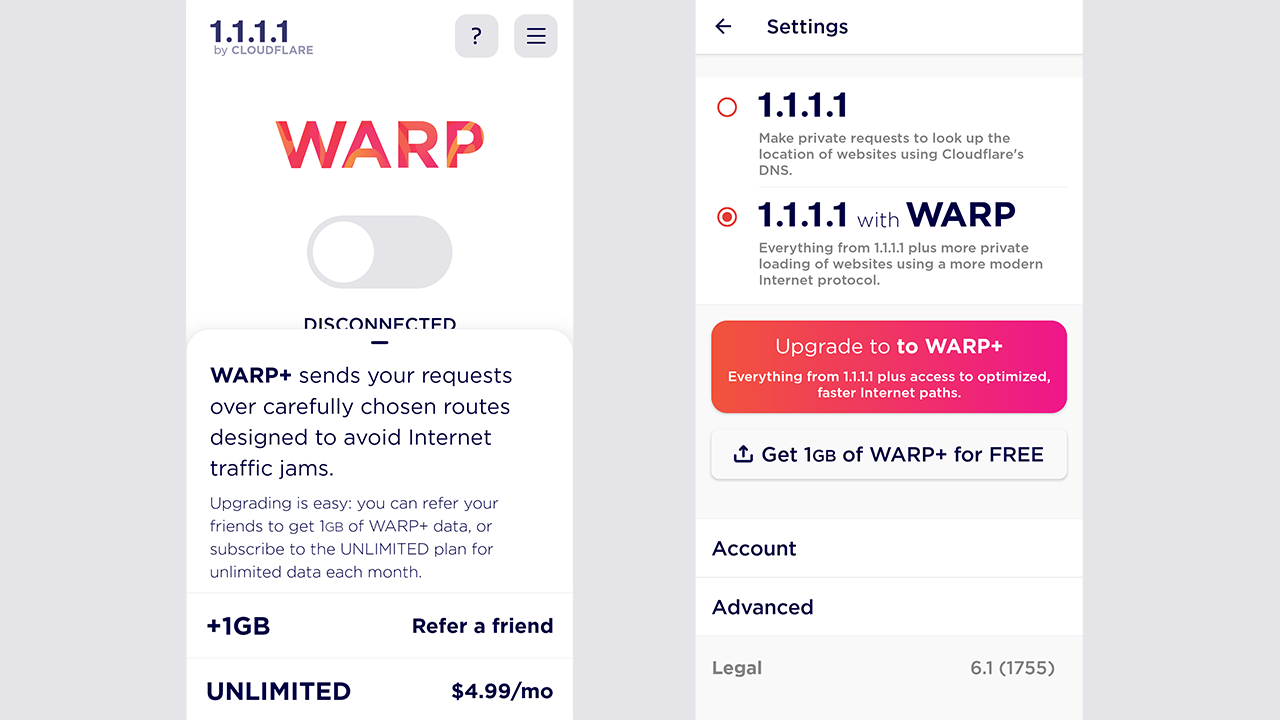 The situation for 1.1.1.1 gets a little muddier with the introduction of its Warp feature, however. Warp creates a secure connection to Cloudflare’s nearest server, and then out to the internet—much like a traditional VPN. Warp does secure your data from anyone on the same network as you and from your ISP, but it doesn’t hide your public IP address. The company says that Warp will always be free, as will its 1.1.1.1 service.

The paid version of Warp is Warp+ Unlimited. This does everything that 1.1.1.1 and Warp do, but it also claims to provide a faster internet experience. When you connect to Cloudflare’s server, your traffic continues through the company’s internet infrastructure, perhaps providing your data a faster route to its destination. Subscriptions cost $4.99 per month. You can also get a free 1GB of data for Warp+ by getting other people to sign up via a special link. In our testing, we used both Warp, Warp+, and 1.1.1.1 individually.

At $4.99 per month, Warp+ is significantly cheaper than most VPNs. In fact, the cutoff for inclusion in our roundup of top cheap VPNs is $9.00 per month. Note, however, that Warp+ and VPNs are still different products. A VPN’s goal is to prevent anyone from seeing your data, while Cloudflare seeks to provide improved, but not maximalist, privacy. VPNs also provide more control over where your data goes, and they sometimes include additional privacy tools, like multihop connections.

Using the DNS Leak Test tool, I found that my IP address was hidden with Warp+ but not with 1.1.1.1 by itself. In both cases, the app successfully hid my DNS requests.

We had no trouble installing 1.1.1.1 from the Google Play app store, although it’s worth noting that there are several lookalikes. Be sure you’re getting the app from developer Cloudflare, and not a knockoff. You can also install Cloudflare’s apps on iOS, macOS, and Windows. Bitdefender’s similar Yonly app is limited to mobile platforms for now.

I’ll say right off the bat that I really like 1.1.1.1 and Warp’s branding. The site, the app icon, and the app itself lean heavily on striking multicolor blobs. In the DNS-only mode, these colors form a moving background that spells out 1.1.1.1. When Warp is enabled, a red-tinged color scheme spells out the name. It just looks great. 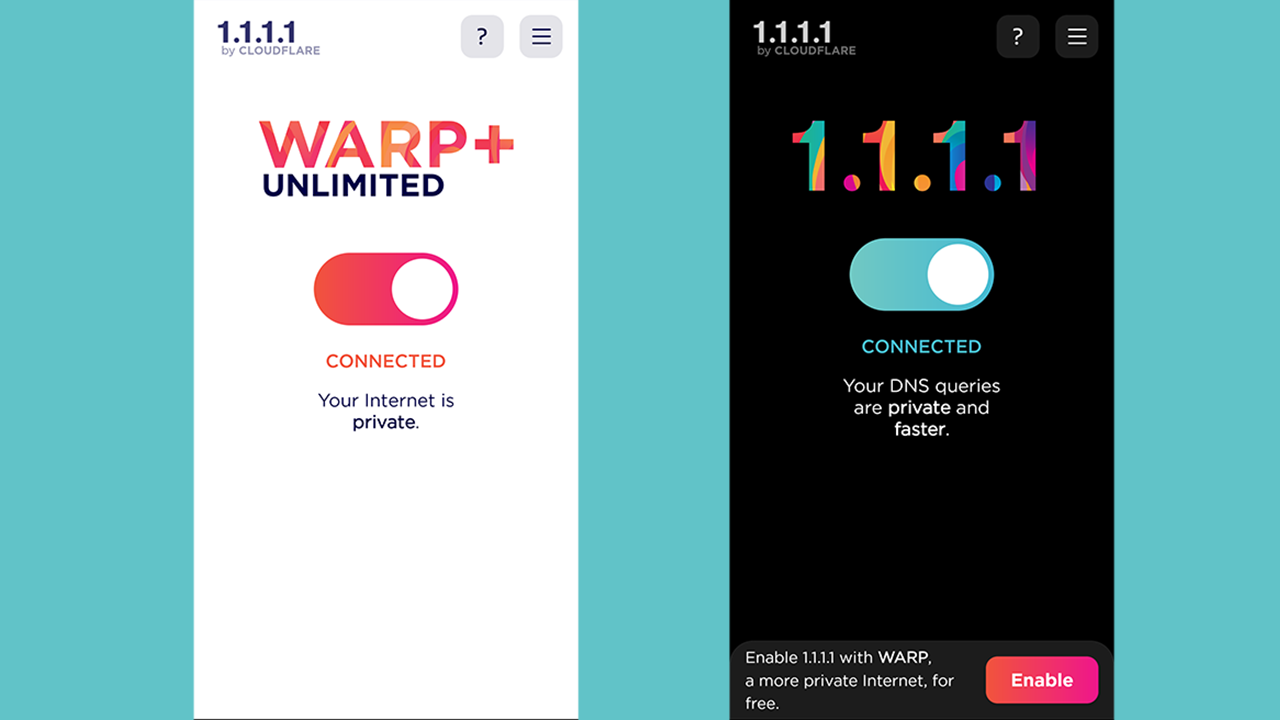 When you first fire up 1.1.1.1, you’ll be warned that the app is installing a VPN profile—just as you are with Yonly. Although 1.1.1.1 uses VPN technology, it isn’t a VPN. But because it needs to create a VPN connection, you can’t use a separate VPN at the same time. As with Yonly, you won’t need to create an account to use 1.1.1.1. In fact, I purchased a Warp+ subscription through Google Play without ever creating an account with Cloudflare.

By default, 1.1.1.1 uses the Warp technology. Just tap the toggle and you’re connected. Tap it again, and you’ll see the option to pause your connection for 15 minutes, one hour, whenever you’re connected to this Wi-Fi network, or indefinitely. You can also switch to 1.1.1.1’s DNS-only mode from this menu. This is a particularly useful feature, since you may have to switch the service off to perform some activities, and this saves you the trouble of reconnecting afterward. You can also toggle between 1.1.1.1 and Warp from the Settings menu.

While extremely simple and very easy to use, there’s confusion about the difference between 1.1.1.1, Warp, and Warp+ Unlimited throughout the app. At the bottom of the screen, a nag offers you to upgrade to Warp+ Unlimited, even though you’re already using Warp. To understand the difference, you need to dive into an in-app FAQ—or read this review.

Despite the app’s simple appearance, it offers some advanced settings. The Custom Endpoint option lets you choose where Warp routes your data. There’s also a setting called Protocol Options, but you can only select DNS over HTTPS, which makes me wonder why this setting is included at all.

As with VPNs, sometimes an app or service just doesn’t work well 1.1.1.1. To address this, the app includes an Excluded Apps feature. These are applications that 1.1.1.1 and Warp will not mess with; the traffic from these apps is routed normally and without the secure DNS resolution. You can easily add or remove apps from the list. This is a handy feature, but I was annoyed that 1.1.1.1 had an additional preset list of apps it would exclude that I couldn’t change. Even if I wanted HBO Max to use Cloudflare DNS resolver, 1.1.1.1 won’t let me. Weirdly, after using 1.1.1.1 for a little while, I found that more apps were added to the uneditable allowed list, including some that had issues with 1.1.1.1 in my testing. 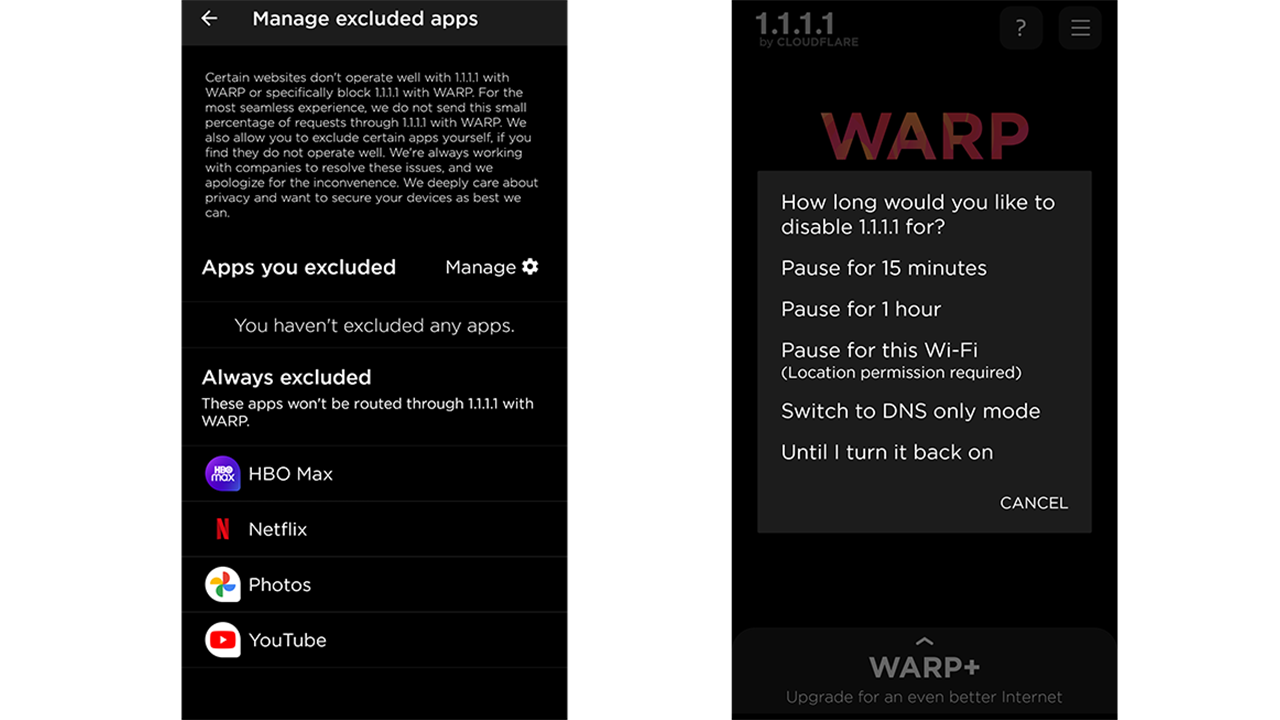 You’ll probably need that pause button and Excluded Apps list. In my testing, several apps and websites, such as Google Docs and YouTube, did not function properly when Warp was active, and I even had some issues when only 1.1.1.1 was in use. This is surprising considering Cloudflare’s promise of a faster, more secure internet experience. Notably, I did not encounter any such issues when using Bitdefender’s Yonly secure DNS resolver app. 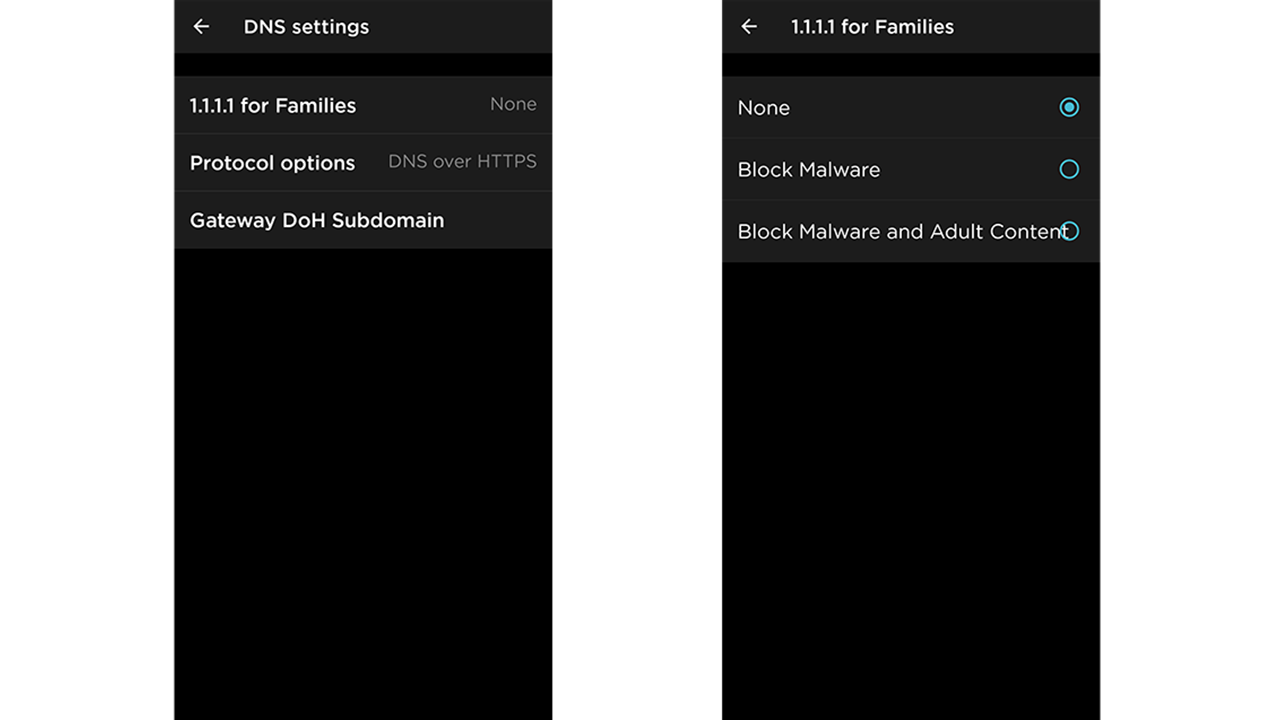 To test its malware-blocking abilities, we used the online tests available from the Antimalware Testing Standards Organization. 1.1.1.1 and Warp managed to block simulated malware and potentially unwanted app downloads, but they did not manage to block simulated drive-by downloads and phishing attacks.

This information is also contained in the company’s surprisingly readable and extremely detailed privacy policy. In March 2020, Cloudflare released the results of a third-party audit carried out by KPMG. A PDF of the audit report is available. This audit confirmed the assurances above, and others besides. It’s clear that Cloudflare is not up to nefarious activities with personal information.

As a reviewer, I feel obligated to acknowledge several controversies regarding 1.1.1.1’s owner Cloudflare. The company has been criticized for providing services to unsavory organizations and hate groups. The company’s reported position is that it should not make judgments about what should, or should not, be on the internet. These issues have not entered into my evaluation of the product.

In our review of Yonly, we used the same testing procedures that we use with VPNs: Take a series of Ookla speed test results with and without the product running, take the median of both results, and then find the percent change between the two.

(Note that Ookla is owned by PCMag’s publisher, Ziff Davis.)

We found that Ookla’s speed test tool did not work properly when Warp was in use, but it did work with 1.1.1.1 and with a paid Warp+ Unlimited subscription. The following results are based on that limitation. Note that because of COVID-19, these tests were also carried out on a home internet connection and personal device, not the PCMag Labs testing network we normally use for VPNs and similar services.

In the chart below, you can see how 1.1.1.1 and Warp+ compare with Yonly, a competing DNS resolver, and Hotspot Shield VPN—which was rated our fastest VPN in 2020. 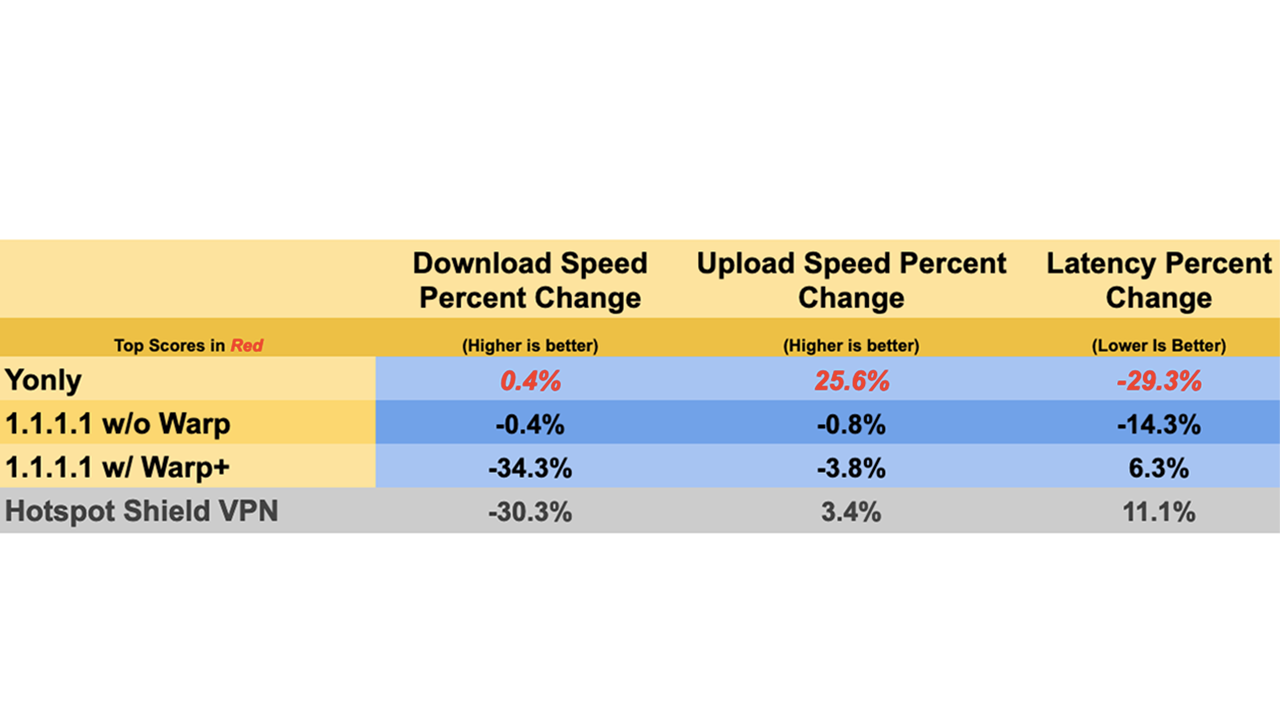 It’s clear that 1.1.1.1 will not slow down your internet speeds and that it performs better than a VPN. Yonly racked up better results, but we’re not confident you can rely on it to deliver the improved performance we saw in testing. Warp+ did not fare as well as 1.1.1.1 on its own and appears to be comparable to using a VPN on Android. Note that our testing represents a snapshot in time, from our particular network, and that your results will likely differ from ours.

On the 1.1.1.1 website, Cloudflare says that Warp+ “make[s] thousands of websites 30% faster on average,” suggesting that the benefits of Warp+ can only be realized on some websites. It may be that Ookla’s test servers simply do not receive this benefit. Anecdotally, we can say that using Warp+ did appear to make media-heavy websites load faster in our hands-on usage.

We reached out to Cloudflare regarding these results. They provided suggestions which we incorporated into a second round of testing. Some of these results were slightly better than our initial testing, but others were worse, and none indicated a faster internet connection. We also performed a third round of testing using Cloudflare’s own speed test tool. This showed a 4.4 and 4.7 percent reduction to download and upload speed test scores, respectively. These tests also showed a 2.3 percent improvement on latency. These are much better results, but they do not dramatically exceed our baseline measurements.

1.1.1.1 offers improved privacy, for free, with less impact (and less expansive protection) than a VPN. On that point, it delivers, and it could be a valuable tool for people who struggle with VPNs but want a little more privacy in their lives. Of course, many people who are concerned with privacy won’t be satisfied with anything less the most protection possible; those people should stick with a VPN.

In our testing, we were impressed by the minuscule impact 1.1.1.1 made on performance, and by its snazzy styling. We were also surprised by the powerful settings available in the app and appreciated the seriousness with which Cloudflare addresses customer privacy concerns with good policies and a major audit.

We were intrigued by the addition of Warp and Warp+ but disappointed that they didn’t deliver better speeds in our testing. We were also surprised at the popular services that were unusable with Warp engaged. The distinction between these products is also unclear, and should be better explained.

We’re giving 1.1.1.1 a good score, but we’re withholding an Editors’ Choice award for this category until we have the opportunity to test more products.

For more on DNS resolution, you can read our story on how and why to change your DNS server.

This article originally appeared on https://uk.pcmag.com/security/130747/cloudflare-1111-for-android 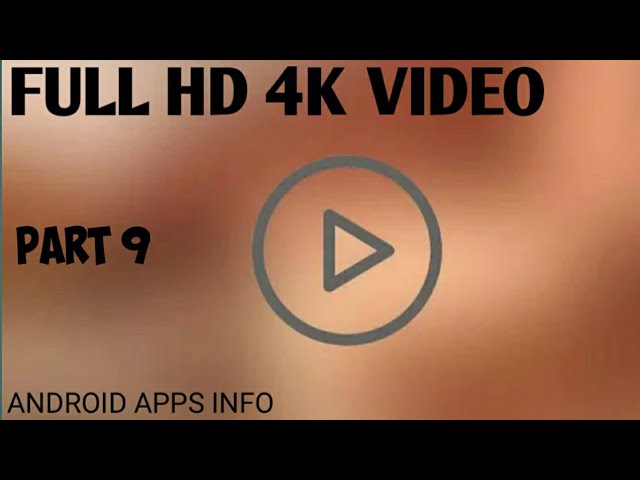 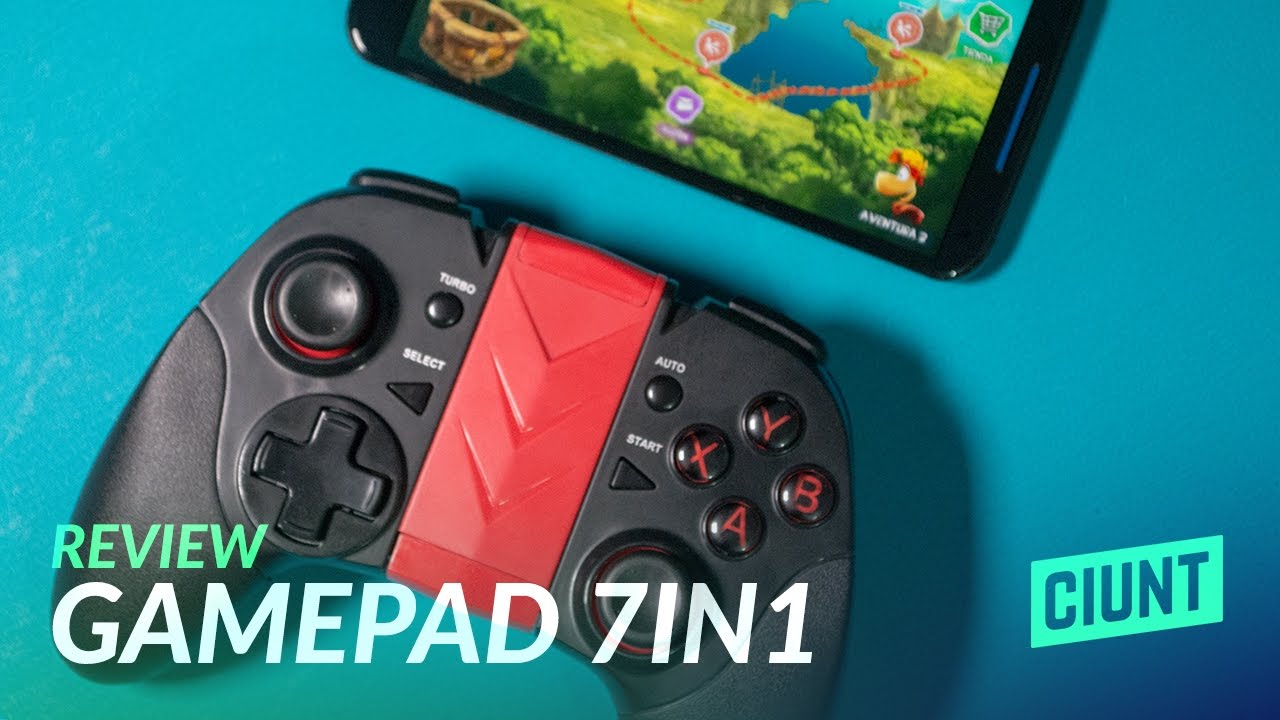 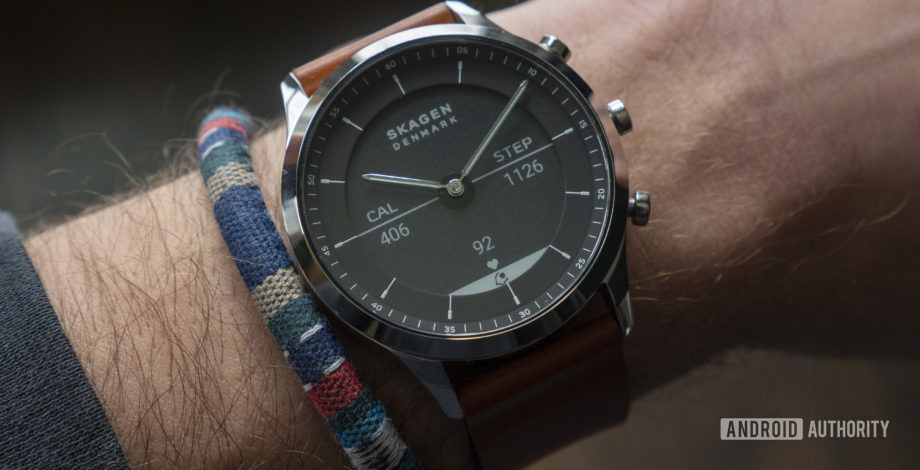